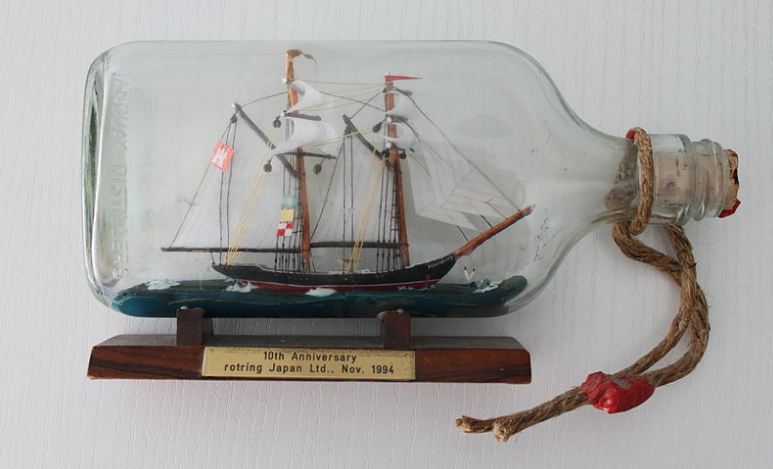 Miniatures are undeniably eye-catching. These have different types and could be an embellishment or a collection. You might have seen and heard a ship in a bottle, one of the miniatures in line. It can be frequently seen in the souvenir shops when traveling and became a decoration in houses or for some purposes. It is interesting to think how a tiny with an intricate design made it possible to sit in a bottle. So, here is the look back and instruction of how this figure is being made.

Objects in a bottle are not new in the eye of the arts because it already exists back in the mid 18th century. Primarily, letters are being inserted in a bottle, and it was also a kind memory from the sinking of the Titanic. There was a message inside from Mathilde Lefebvre, who was just a 12-year-old French girl at that time. The letter is believed thrown at the Atlantic ocean on the day the Titanic sank, April 15, 1912. The legitimacy of the letter is being investigated by the researchers. Aside from the letters, there are also some variations too, like human figures and puzzles. The model ships are said to originate from the sailors. Other than their usual job in the sea, they would spend their spare time in storytelling and creating model ships from available scraps in the ship. Also, monks were said as one of the earlier carvers of this masterpiece in the monasteries. Each miniature was detailed and done passionately. As time went by, various selections of ships in a bottle emerged and continuously innovating.

How it’s Being Done?

Thinking of how the figures will be put inside and arrange in the bottle is kind of a bottleneck problem. To put a ship inside, basically, you need a steady hand because it will be a narrow and meticulous job. The basic materials that you should have are wood, glass bottle, sandpaper, thread, wire, glue, clear nail polish, Beeswax, fine paintbrushes, medium-weight white bond paper, Linseed oil putty, artists’ oil colors, Corks, red sealing wax, cotton fishing line, miniature screwdrivers, tweezers, and such. Ship models have variations, so the needed materials might depend on the situation.

Initially, the ship should be foldable because it needs to be laid back while entering the bottle. To create one, here are the simplified steps:

To create a hull, you will need wood. It could vary but is usually hardwood such as spruce or fir. Some are practical and just make it out of blank pieces of wood from the craft stores. Shape the outline of the hull and make sure that it will be fit enough to the bottle. Drill the wood to make holes for the upper and lower parts of the hull, then secure it with toothpicks to keep the alignments. Use sandpaper to shape those hulls in your decided outline. Then, add the keel and rudder to the bottom of the hull.

Pick your desired design for a ship and get the right color for it. Paint the hull while the two top pieces and the two bottom pieces are glued together. Some might have a strategy, but this is the ideal way for quick comprehension.

The mast and the booms should be the exact size in your outline. Use a toothpick and sandpaper until you reach the right form. The two parts of the bowsprit, the bottom stick that is inserted in the hole of the hull, and the top one is glued and wrapped around by a thread. The threads will serve as the hinges, so they must be glued to the back of the booms. These booms are connected to the masts by the thread. Now, the hulls should be drilled with five holes. These holes will be inserted by a thread that will go through also to the mast. In this way, you will create shrouds.

To secure the ship, A woodwork stand held by a small screw is needed. Each mast has two lines connected to the bowsprit while the other line is attached to the top of the shrouds onto the bowsprit. For some details, the anchor can be made of a thin wire, the ship’s stand inside the bottle could be popsicles, and the sails could be any paper.

Putting a Ship Inside a Bottle

As mentioned earlier, the ship should be foldable because you need to lay it back while inserting it inside the bottle. Lower the back mast and move it forward while the sails are rolled. Once the ship is already inside, pull the threads carefully to raise the masts until the two hulls rejoined. Next, put the deckhouses and secure them with glue. To wrap up the ship in a bottle, seal it with a cork.