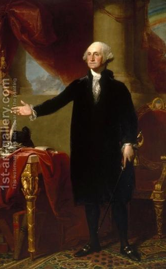 Art has multifarious purposes, sometimes, it strives to plant a revolutionary spirit in us or give us the gift of aesthetic beauty. While other times, it endeavors to honor the presence of an exceptional being in the form of portraits that immortalize the lives of legendary people.

In an attempt to do that, the United States carved out a beautiful tradition of commemorating its presidents with portraits. This tradition was kickstarted after George Washington’s portrait and now is often substituted with a digital photograph.

This life-sized masterpiece of the legendary 64-year-old president, George Washington kickstarted the whole presidential portrait display protocol in the first place. It was in 1796 that the painter Gilbert Stuart was commissioned by Lord Landsdowne to paint a portrait of George Washington.

This portrait was painted around George Washington’s December 7, 1795, at the annual address to the fourth U.S. Congress. Gilbert actually made three copies of the portrait and one of them had the honor to grace the East Room of the White House for quite a while. The artist rightfully brought to life the authority and humble demeanor of the President that he was famous for alongside dipping the portrait in a vintage panache with the background.

The Official Portrait of John F. Kennedy by Aaron Shikler 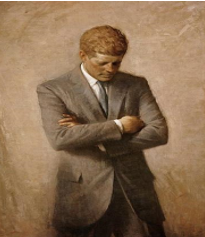 This portrait of one of the most famous presidents of the United States is one of a kind for a miscellany of reasons. Firstly, it was made posthumously by Aaron Shikler after a humble request from Jacqueline Kennedy in 1970. Secondly, this portrait was undertaken generally for the purposes of character study.

This is so as here, unlike most Presidential portrait, Kennedy is looking towards the ground with a pensive look and his hands folded together as if he is in a grave situation.

Aaron as an artist wanted to portray the president differently from how everyone thinks of him to be or generally perceives him to be which is why he went down this unconventional path. This portrait is a testament to Aaron’s artistic prowess as an artist as he shaped it out of an old collection of photographs.

The Official Portrait of Theodore Roosevelt by John Singer Sergeant 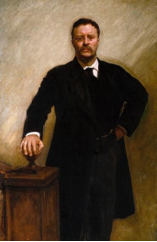 The name of Theodore Roosevelt is known to everyone and anyone, even those residing outside of the States because of his well-framed policies. His portrait was originally commissioned to Theobald Chartran but Theodore absolutely loathed that portrait of his.  He went to the extent of hiding it in the farthest corner of the White House as his family members said it made him look as harmless as a cat.

After this initial failure, another artist called John Singer Sergeant was commissioned to finish this unfinished task. The President and Sergeant started with a bad rapport due to intense bickering regarding the background and pose of the portrait. But the final portrait received much adoration from Roosevelt and ultimately hung in the White House.

The Official Portrait of Calvin Coolidge by Charles S. Hopkinson 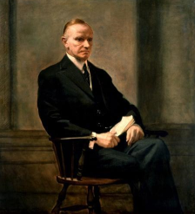 The oil-on-canvas portrait of Calvin Coolidge was sketched and brought to life by Charles S. Hopkinson in 1932. Hopkinson was a much-lauded painter who had studied the art in multiple forward cities. Hopkinson’s swift hand displayed the sternness as a heavy characteristic of Coolidge quite beautifully.

Ronald Reagan derived a lot of inspiration from Coolidge which is why he got his portrait shifted from the Grand Hall into the Cabinet Room. This portrait sat next to Thomas Jefferson’s portrait was seemed befitting to Ronald as he said it seemed more apt sitting next to a founding father. 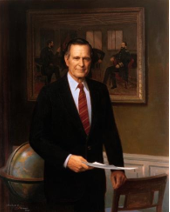 The unveiling of George W. Bush’s portrait was probably the most memorable ceremonial experience as he promptly said to the audience, “Welcome to my hanging” which cracked everyone up. It was unveiled in the East Room of the White House in 2012 with much pomp and show.

Sanden felt that the hardest part of drafting this portrait was trying not to include Bush’s smirk as it was like an omnipresent expression which he couldn’t avoid even if he tried. Even a previous artist Robert Anderson felt the same issue while making his portrait for the National Portrait Gallery.

The tradition of a presidential portrait was one that still continues and is a much-celebrated practice that is meticulously followed in every term and was inaugurated by Washington’s portrait. It is a beautiful tradition as it celebrates all the contributors of the State with much diligence. These paintings of men are crafted to eternalize their contributions and reign in the history of the United States to be cherished forever.